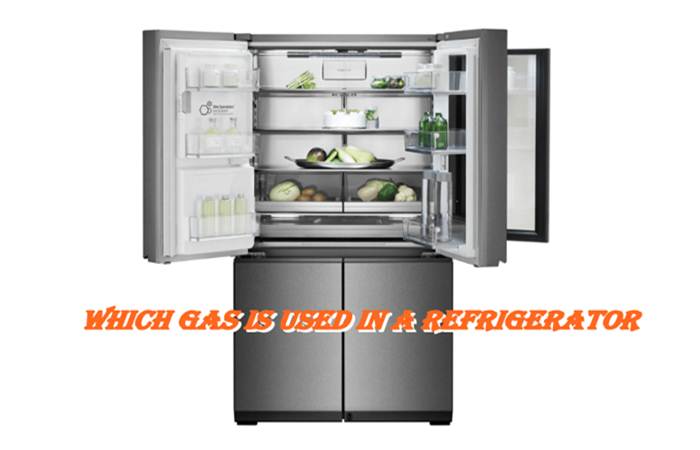 Hello friends, we will discuss which gas is used in the refrigerator in this article.

Nowadays Refrigerators are in everyone’s house, this fridge has become a part of the family. A house without a refrigerator seems a bit incomplete.

The refrigerator helps keep vegetables, foods, and beverages cool and refreshed for a few days.

Do you know how the fridge works?

Have you ever wondered how the cold air inside your fridge goes? Do you have any idea how the fridge keeps your food safe? If not, you are in the right place.

Well, in fact, it is a Refrigerant gas responsible for keeping your foods cool. Now, before you start thinking about Refrigerant gas, let us take you through the possible details about refrigerator gas.

In the expansion valve, the refrigerant enters the evaporator coil which then absorbs heat from the food stored in the refrigerator. The refrigerant which is in gaseous form is then transferred to the compressor, where it is compressed into a high-pressure hot gas, which subsequently enters the condenser coil.

Thecondenser coil on the outside releases heat into the atmosphere and therefrigerant gas is converted into a liquid form as it relies on the expansionvalve.

Refrigerant gas in the fridge

Here is a reference video from the YouTube channel Lesics which explains how the refrigerator works.

What is the Refrigerant Gas?

Refrigerator gas is a chemical gas that has a very low evaporation point and condenses to cool the surrounding air.

It undergoes repetitive evaporation and condensation processes and, as a result, all its heat is ejected and the temperature inside the refrigerator cools.

In the 20th century, fluorocarbons, particularly chlorofluorocarbons, were gases commonly used in refrigerators. But over time, they were phased out mainly due to their ozone depletion effect.

In the early 1800s until 1920, only toxic gases were used in refrigerators. These gases were a mixture of chlorine, fluorine, and carbon. However, around the 1970s, it was discovered that these gases were dangerous to the atmosphere.

When these gases leak into the atmosphere, they undergo chemical changes due to the sun’s UV rays and thus cause greenhouse effects and ozone depletion. After that, some measures were taken to find such cold gases which can overcome this problem.

On the other hand, gases such as HFCs do not contain chlorine and thus have no negative or harmful effects on the issue of ozone degradation. Also, this is the reason why it is trading HCFC and HFC gases and is becoming popular for being used as refrigerant gases modern.

This gas is common in older refrigerators, but was ozone-depleting and thus phased out. It is not seen in any modern refrigerator.

This gas can currently be seen in the refrigerator. Although this gas is ozone friendly, it is a powerful greenhouse gas and thus will be depleted soon. However, it is the preferred option for the current situation.

This gas is used as a replacement for R22 gas as it is non-ozone deficient. It is one of the trending gases used in refrigerators and can also be found in many repaired refrigerators already operating on R22 gas.

It is a flammable gas and it is commonly used in small modern refrigerators.

This is the era of technology. As much as technology makes our lives easier, on the contrary, it is also harming the environment. We are living in a time where we are able to create an essential balance between meeting our needs and taking care of the environment.

There have been many improvements in the standard of living of people who have helped to improve the surrounding atmospheric conditions. A visual correction that is performed in one direction is the use of improved and defined refrigerant gases.

While the previously used gases were quite harmful to the environment due to their ozone depletion factor, new refrigerant gases are chosen very wisely. All these gases provide the necessary support to the refrigerator to perform its best, along with taking good care of maintaining environmental balance.

So which is the gas currently used in modern refrigerators? Let us discuss them in detail.

Tetrafluoroethane is a non-flammable gas used primarily as a “high temperature” refrigerant gas for refrigerators and automobiles air conditioner.

This refrigerant gas is one of the commonly used gases that you can find in almost all existing refrigerators. This gas is effectively condensed so that it can cool the surroundings of the machine without causing the problem of ozone depletion.

The use of this gas began in the early 1990s and is stillused in almost all types of machines and equipment. This gas is readilyavailable and best protects against ozone depletion conditions.

It is another gas currently used in refrigerators. It is used as a pressurized liquid that circulates as gas to absorb heat and cool the temperature inside the fridge. Heat gas is then passed through compressors to disperse the heat after which it is again pressurized to be used as a liquid.

Chlorofluorocarbon is a hydrocarbon that consists of one ortwo carbon atoms, where hydrogen atoms are replaced by chlorine and fluorine.

Chlorofluorocarbon began to be used in refrigerators in theearly 1970s and many brands still use this refrigerant gas in their products.

It is a popular insulator used as internal padding in the refrigerator to keep heat out of the machine. It is less expensive and also acts as an effective inhibitor between the heat inside and the refrigerator.

As a result, it increases the internal temperature of themachine and thus helps to provide effective cooling. Polystyrene was first usedas a refrigerant substitute in the 19th century.

Some modern refrigerators today use this effective insulator that acts as an ideal barrier between the surrounding heat and the interior of the machine. This insulator is very easy to clean, making it a preferred option to use. The 19th century marked the use of acrylonitrile which can still be seen.

This was some relevant information on effective and popular gases used in refrigerators to give the desired performance. With the introduction of each gas, not only did the refrigerator work but it also helped provide the best environment.

Which gas is used in AC and refrigerator?

Most conventional refrigerants contain bromine or chlorine, R-410A (which contains only fluorine) does not contribute to ozone depletion.

Which gas is used in the refrigerator in India?

In previous years, the most commonly used chlorofluorocarbons were refrigerants. CFC destroys the ozone layer and is thus replaced by hydrofluorocarbons such as R134a.

The most commonly used refrigerant in refrigerators is R 134a which is tetrafluoroethylene, which does not deteriorate ozone layers.

Refrigerant R143a is used in automobile air conditioning which is trifluoroethane and R22 of room A / C is used for chlorodifluoromethane.

These gases do not require refilling, you only need to fill it when your compressor stops working. If the fridge is not in operation of A / C, the referrers became weak.

The pollen filter should be replaced periodically for the long life of A / C in cars, and it should be regularly cleaned for room A / C.

Which gas is used in Godrej refrigerator?

Electrolux, GAL’s competitor in the domestic market and a multinational company, uses hydrocarbons for refrigerators manufactured in Europe but continues to use HFC-134a in India. Godrej is for the first time a commendable initiative.

Why Freon gas is used in the refrigerator?

A non-flammable gas, known as freon, undergoes an evaporation process again mostly within the refrigerator to keep the temperature low.

The same cycle is used for air conditioners. Freon liquid then flows through an expansion valve, which causes it to cool until it evaporates. So that’s why Freon gas is used in the refrigerator.

Who invented the Refrigerator?

American refrigerator John Gorey designed a refrigerator in 1844 based on the design of Oliver Evans that produced ice to cool the air for patients with yellow fever.

The first ice-making machine used for practical food purposes such as meatpacking and winemaking was invented in 1857 by James Harrison.

Can refrigerators be recharged?

Household appliances lose their power over time. Fortunately, most refrigerators can be revived with a few simple appliances and freon cylinders.

Recharging a refrigerator is also a great way to save time and money before replacing it with a new refrigerator.

How can I charge gas in my refrigerator?

DIY can help you fill gas, but as it deals with hazardous gases, it is better to call a technician who specializes in refrigerator repair and gas filling.

Now you can easily hire a refrigerator technician without leaving your home. Get your refrigerator fixed to your door. Many online home service providers help you fix a fridge with a lower price than a pizza.

Which gases are used in a refrigerator for cooling? Are they harmful?

Gases used for refrigeration are not very harmful. Are mainly halogenated compounds of methane (CH4). They are less toxic and less flammable than other common gases that are not halogen like methane, ethane, or propane that can do the same thing.

If you have trouble breathing (similar to chloroform, CHC3, which is a liquid at room temperature) and like any inert gases, they are at risk of suffocation because they can displace oxygen in confined spaces.

Chlorofluorocarbons (CFCs) have been used as refrigerants for years and even as propellants before their effects on the ozone layer were observed.

Now, less substituted hydrochlorofluorocarbons (HCFCs) have completely replaced CFCs because their ozone depletion capacity is very low, but some believe it is still not low.

But all these refrigerators, as well as regular alkane gases (methane, ethane, propane), also have an effect on global warming because they are all greenhouse gases.

When do refrigerators leave CFCs into the atmosphere?

Older refrigerators and air conditioning appliances still use CFCs. When the system is disposed of, the gas used must be “recovered” using appropriate equipment and by an EPA-certified individual.

Improper release of gas is “considered” harmful to the environment, although it is very doubtful.

What is your ultimate goal and risk tolerance?

R-134a => Popular and proven, but global warming has potential effects

R-600a (not 600A, the difference is) => isobutane. Nearly the same pressure/temperature profile as 134 A, quite efficient, no ODP or GWP, can use a low charge in some cases, but (obviously) it can be highly flammable.

In the future, you will see a lot more applications of the R-600A, but not now. Reference- Quora

If you care about energy efficiency and global warming, then you should go for a refrigerator with R-600A. With strict standards and better advances in technology, we will see better refrigerators in the future.

Through this article, I want to tell you “Which gas is used in the refrigerator”. I hope you find the answer to all your questions here.

We use cookies for various purposes including analytics and personalized marketing. By continuing to use the service, you agree to our use of cookies.